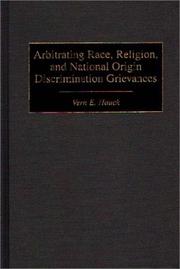 Published 1997 by Quorum Books in Westport, Conn .
Written in English

VERN E. HAUCK was Professor of Industrial Relations at the School of Business and Public Affairs at the University of Alaska at Anchorage and is a professional labor arbitrator. He is the author of several books, including Arbitrating Race, Religion, and National Origin Discrimination Grievances (Quorum, ).Cited by: 2. Arbitrating discrimination grievances An empirical model for decision standards Article in Policy Studies Journal 16(3) - September with 2 Reads How we measure 'reads'. CAPSULE REVIEWS providing practical strategies for avoiding arbitration or litigation and responding to such grievances. VERN E. HAUCK, ARBITRATING RACE, RELIGION, AND NATIONAL ORIGIN DISCRIMINATION GRiEVANCEs (Quorum Books, pp. $). Hauck's book on the arbitration of racial, religious, and national origin. Race and National Origin Discrimination: Overview of the Law. Title VI of the Civil Rights Act of prohibits discrimination based on race, color, or national origin in programs or activities receiving federal financial assistance. All federal agencies that provide grants of assistance are required to enforce Title VI.

Discrimination because of race, religion or belief If you have been treated unfairly because of your race, religion or beliefs then you have been discriminated against. This might be . In the Equality Act religion or belief can mean any religion, for example an organised religion like Christianity, Judaism, Islam or Buddhism, or a smaller religion like Rastafarianism or Paganism, as long as it has a clear structure and belief system. The Equality Act also covers non-belief or a lack of religion or belief. For example. Book Review: Labor and Employment Law: Arbitrating Race, Religion, and National Origin Discrimination Grievances Martin H. Malin Professor of Law and Director, Institute for Law and the Workplace, Chicago-Kent College of Law, Illinois Institute of Technology.   Decem Dear Colleagues: On the eve of this new year, we are writing to enlist your help, as educational leaders, to ensure that your schools and institutions of higher education are learning environments in which students are free from discrimination and harassment based on their race, religion, or national origin.