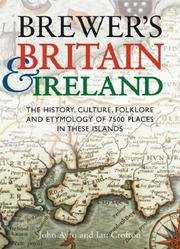 Brewer"s Britain & Ireland The History, Culture, Folklore and Etymology of 7500 Places in These Islands by John Ayto

'the book provides an abundance of historical detail on how Britain got its names.' GOOD BOOK GUIDE 'This is much more than just a place-name dictionary. It is an A-Z of these islands, and explores the history and cultural associations as well as literary, musical, artistic and folklore connections of . From publisher's description: Brewer's Britain and Ireland is a 'phrase and fable gazetteer', gathering together in one A-Z volume the linguistic, historical, folkloric and literary associations behind thousands of locations in the British Isles, both celebrated and less well-known, from Ashby-de-le-Zouch to Blubberhouses, and from Wigton to Wetwang.   Brewer's Britain & Ireland book. Read reviews from world’s largest community for readers. Pick any spot in the British Isles and you’re sure to find a to /5(14). Background. The IFBB was launched on 14 April at the Brewers' Hall in London. It had 36 members. The defence of 'The Tie' - tying the tenant within his tenancy agreement to buying the brewery's own beers - was a key aim of the IFBB. The organisation also focuses on recruitment of licensees, beer quality training and attracting new cask ale drinkers.